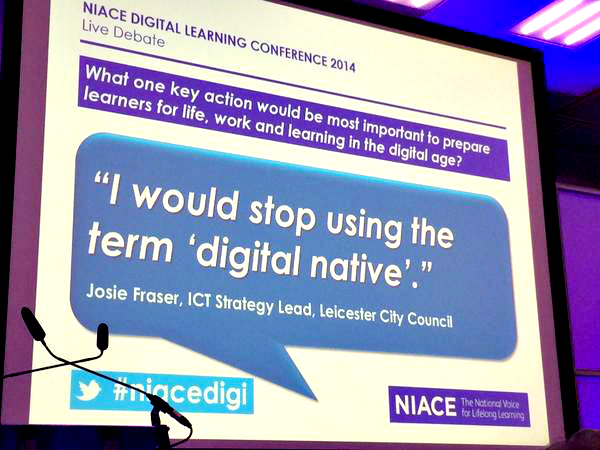 NIACE, the National Institute of Adult Continuing Education (the UK’s lead organisation for lifelong learning) held its annual digital learning conference last week. I was very happy to be invited to contribute to the conference debate, ably chaired by Go On UK CEO Rachel Neaman.

Panellist were invited to put forward and argue for a key action to help “prepare learners for life, work and learning in the digital age”. My proposal was that we stop using the term ‘digital native’ to characterise young people (and by extension, the term ‘digital immigrant’ to describe not so young people). My notes are here:

The term ‘digital natives’ was coined by Marc Prensky in 2001. It’s the most popular of several terms that characterise young people as different from those born before the early-to-mid 1980s –and brought up in a society where mobile, gaming and internet based technologies have become pervasive. Prensky describes this group as fundamentally different from those born later – not just culturally but neurologically – his writing at this time suggests that engagement with (then) new technologies from an early age means that the brain development of digital natives is significantly different from previous generations. Digital natives have grown up with technologies, and are “used to receiving information really fast. They like to parallel process and multi-task. They prefer their graphics before their text rather than the opposite. They prefer random access (like hypertext). They function best when networked. They thrive on instant gratification and frequent rewards. They prefer games to “serious” work” (Prensky, 2001). Digital immigrants have difficulty in accessing new technological cultures and practices, and are characterised as learning “…like all immigrants, some better than others – to adapt to their environment,” But “…they always retain, to some degree, their “accent,” that is, their foot in the past” (Prensky, 2001).

This idea of a clear-cut, homogeneous generational divide has been disputed by researchers since at least 2006 – see for example, Digital Na(t)ives? Variation in Internet Skills and Uses among Members of the “Net Generation” (Hargittai, 2010); The Net Generation and Digital Natives (Jones & Shao, 2011); Beyond the Net Generation Debate: A Comparison of Digital Learners in Face-to-Face and Virtual Universities (Gros et al, 2012).

The immigrants/native dichotomy has however persisted in its popularity. ‘Digital native’ recently made it on to the shortlist for the Chambers Dictionary word of the year and the nostalgic spectre of digital immigrants is periodically raised again. I’d argue that this popularity in part is down to its easy adaptability into a blunt metaphor of difference. This populist use equates young people’s immersion and proximity to mobile, gaming and web-based technologies with knowledge, skills and confidence. Young people are ‘good’ at tech stuff, older people aren’t. ‘Tech stuff’ is a thing, rather than a diverse, overlapping and developing landscape of technologies, practices and environments.

Assumptions about young people’s familiarity with technologies risk exacerbating inequality. Access to devices and connectivity isn’t equal across all young people, and neither is support in developing skills – from peers, parent/carers, or schools, equally distributed. Socioeconomic status remains a key issue in relation to access, with a small but significant number of young people having very limited access.

While the majority of young people do have more routine access, it certainly doesn’t seem inevitable that these young people have innately developed the kinds of creative and critical skills that support active citizenship in digital environments. Ofcom’s 2014 Children and Parents: Media Use and Attitude Report reports improvements in young people’s understanding of search engine results, with just over half (52%) of 12-15s who use search engines now understanding that some of the sites returned will be truthful and some won’t be, compared to 45% in 2013. While the picture in terms of basic digital literacy is improving, it’s still a long way from the glossy wholesale assumptions called up by the idea of a ‘digital native’ 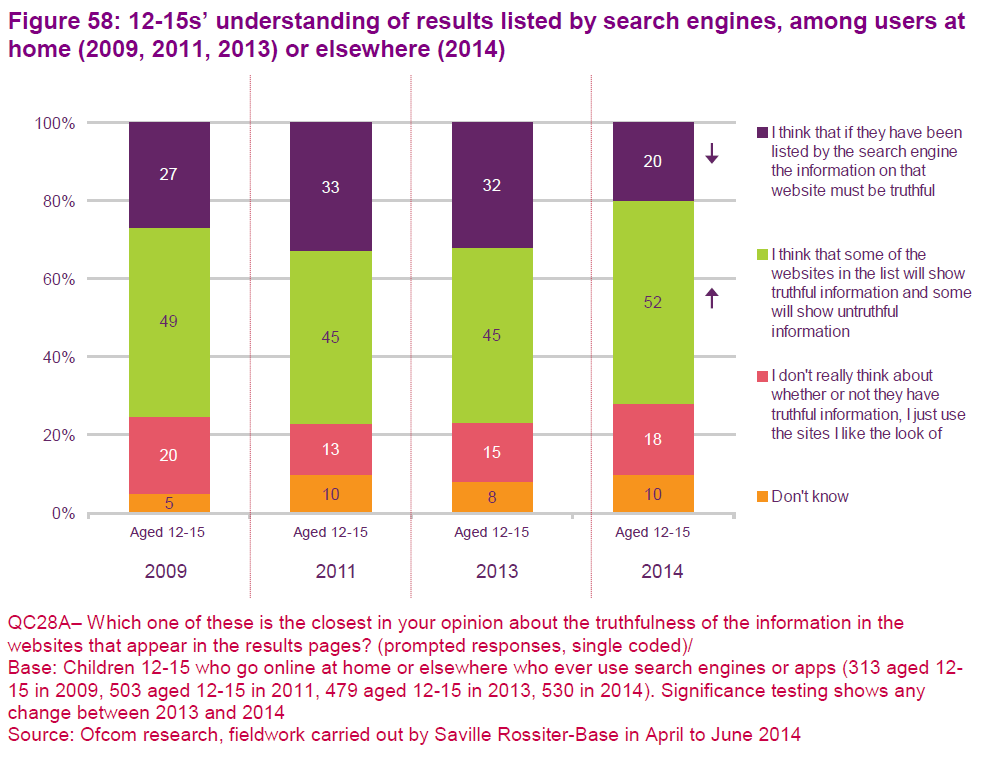 We need to continue to challenge unhelpful assumptions and stereotypes about people based on when they happened to be born, and ask people what they mean when they use these terms. Native and immigrant assumptions obscure the actual picture for both younger and older people. We need to ensure learner of all ages have access to the  knowledge and skills necessary to make to most of technology in terms of educational, social and economic opportunities and challenges.