All school staff benefit from engagement with continuing professional development (CPD) – keeping up to date in their subject and curriculum area, and in teaching approaches and methods. Web and mobile based technologies have changed the landscape for school staff in terms of how they can connect to other educators both locally and across the globe. Personal learning networks (PLN), developed and managed by educators, allow school staff to discover, discuss and share relevant ideas, resources and approaches.

Twitter is jam packed with educators from all over the country and world, who are interested in sharing with and learning from colleagues. I ran two Twitter for Educators CPD sessions in March, designed to support staff in using Twitter in developing their professional networks. The workshops support work around the DigiLit Leicester project sixth framework strand – Technology supported Professional Development, and were designed to help staff improve their confidence and skills in this area.

Two sessions were held at De Montfort University: a beginner workshop, aimed to get staff up and running with Twitter and to introduce the basics and an intermediate workshop, offering essential tips and tools for improving the Twitter experience.

This session was aimed at absolute beginners and assumed no prior use of Twitter. Staff were walked through the sign up process and introduced to the basics: creating a username, choosing an avatar (profile picture) and writing a 160 character biography. The interface and functionality of the site were explored through a desktop tour. 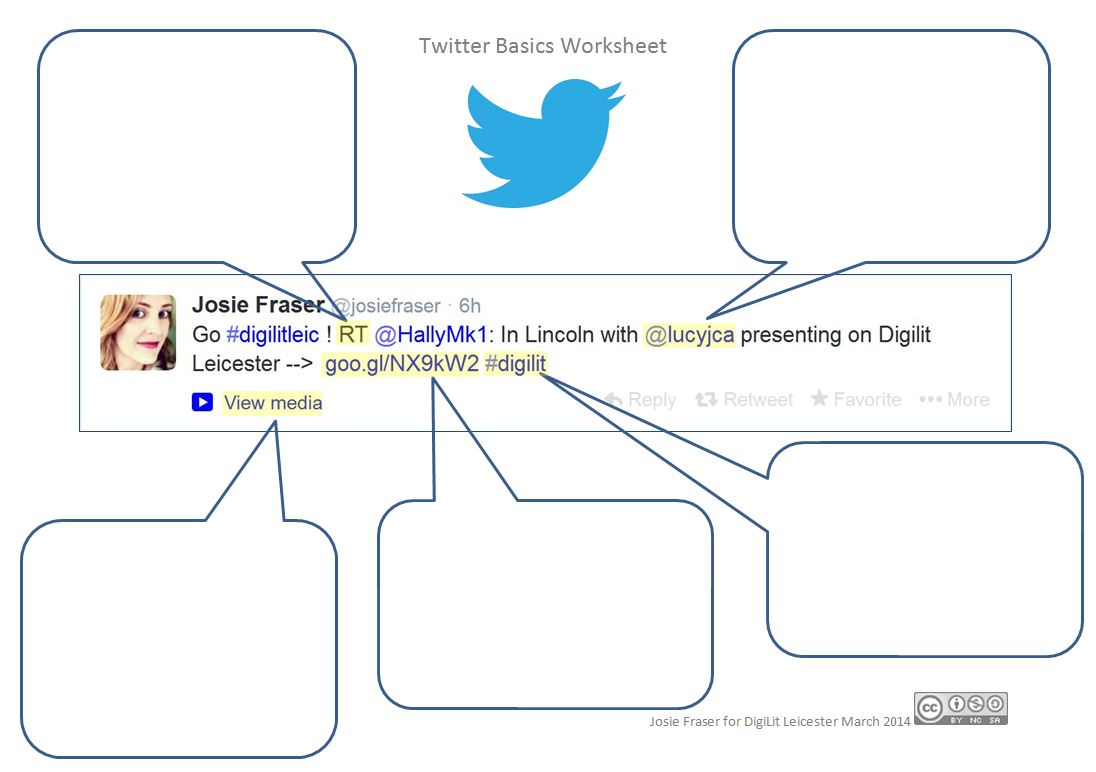 Understanding the component parts of a tweet is important for beginners wanting to get to grips with the service. This Twitter basics worksheet (word) was created to help staff identify and become familiar with the key conventions used in tweets.

Twitter tips focused on the use of Twitter as an educator, and issues relating to online behaviour and identity for educators. These include advice about connecting to and communication with students, parents and carers,  and validity checking information before retweeting.

The second session was designed for staff who are familiar with Twitter basics and already have profiles. This session focused on engaging with school communities on Twitter and using the site to establish and develop personal learning networks.

In the spirit of passing time at Christmas, and following on from a heated discussion about the meaning and robustness of community in online environments, I invited 100 of my 1,276 current Twitter followers to fill in a quick survey cunningly designed to provide a fairly wonky measure of community allegiance. Of course I welcome critical feedback about the methodology employed, but I had two hours sleep last night and yes, I quickly realised the massive cultural bias implicit in most if not all of the questions.

I love Twitter and I've spent an unhealthy amount of time hanging out there in the last year. It's a great site: friendly, open, sharing – sometimes even a little too sharing, but is it a community? Are online meeting places just a useful ruse to avoid the reality of community corrosion offline? Have social networking services taken the place of Baudrillard's Disneyland schema – are they imaginary communities serving to mask the absence of 'real' communities?

Obviously a handful of poorly conceived questions and a small random sample cannot hope to answer such weighty concerns. Maybe they can tell us something about how friendship and civic responsibility are reconfigured within new networks that run through and across geographic boundaries and levels of social contact. Or maybe not.

I invited 100 people to answer – this number determined by the ease of extrapolating percentages and the limit of free accounts over at PollDaddy. Unfortunately the service stopped working for some reason after 90 respondents so the following figures are taken from that final total.

Everyone spent approximately 6 minutes completing the survey, and those 90 nice people filled out the survey in about 3 hours from my initial call for help. Respondents came from Europe and the US, and from the rest of the unknown world. I'm in the UK and operating on GMT time, and most of the people I have met in 3D as well as on Twitter or online come from the UK, so no surprises that baring those 'there be Dragon' lands who represented the largest constituency of respondents. Each question asked for a yes, no or maybe response to helping out @josiefraser in a variety of scenarios. All respondents were anonymous, although a bunch disclosed their answers to me over at Twitter.

Question 1: Would you fill out a survey for me?

OK – a pretty self-selecting answer since respondents had already clicked through a link asking them to do so, but given that they had no idea what they were being asked to fill out and only internet promises of 'a very short survey', still gratifying that there were no 'no' answers. I'm pretty easy to please and the survey could have finished there, however I pressed on in the interests of academic rigour.

Question two: Would you do a Google search for me, in response to me wondering about something that was obviously searchable?

This question was designed to find out if the respondants would be wiling to do something that took a more effort and thought than ticking boxes, but not too much more. Quite a high percentage (13.3%) said no. Given the amount of JFGI tweets & general annoyance at time wasting questions that flows through the social media den of iniquity that is Twitter, I wasn't that surprised. Given that I work in Social Media myself, I'd have actually thought the number would be higher. However I will regard the high yes figure (53%) as a sign of the generosity of my Twitter community and not as cynical commentary on my skills.

Question three:  Would you step away from your computer and find out something that was in the same room, but not within reach of your computer chair for me?

The first real test of my respondents mettle! Would they be prepaired to help me out in a way that required actual physical effort?

80% of them would! Pressing forward:

Question four: Would you buy a pint for me?

Less success here than the standing up and looking around for something for me question, but still an impressive 68.9% said yes, they would buy me a pint. A pint of what wasn't specified, but it's still probably fair to assume that some of the 11.1% who wouldn't buy me a pint refused on religious grounds, because they look too young to get served in a pub, or in consideration of my health.

Knowing that my Twitter community isn't made up predominantly of very rich people, 52.2% of people who would lend me money is a huge result. Thanks!

Question six: If my house burnt down, could I come and live with you for a week?

OK – now on to the intimate questions. Would you let me come and live in your personal space on a temporary basis? An amazing 41.6% said yes, with a further 37.1% giving me an encouraging maybe – presumably some of them on the condition that I hadn't just burnt down my own house. This was one of only two questions skipped by anyone, presumably because of the level of moral complexity and lack of context. Interestingly, some people who wouldn't lend me money agreed to let me come stay with them.

Question seven: If I developed a really bad allergy, would you adopt my cats?

This question was designed to test the long term commitment of my Twitter community. Actually, it was probably the most badly designed question here, since it doesn't account for other peoples allergies/aversions to cats, or their own personal and domestic circumstances. Also, I've previously tweeted about the feral cat I now grudgingly look after, who has invaded my house and regularly attacks or intimidates me.

However – this result conclusively proves that 1) there aren't a lot of cat lovers in the Twitterverse and 2) more people pay attention to your tweets than you suspect. 71.1% of respondents were not prepared to save my cats from a possible one way trip to the vet, and a further 11% would think about it.

Question eight: If I needed to stay in the country, and you weren't already married to someone else, would you marry me?

Really digging deep here, and asking people all kinds of ethically engaged questions about someone that they possibly only know off Twitter. There are legal barriers, bureaucratic nightmares, and questions of feeling and delicacy, as Dickens and Austin would put it. Additionally, considering the low figures of respondents currently likely to be living in countries where same sex marriage is legal would probably put some of my respondants off.

Even so – 7.8% of my respondants would marry me if I really needed them to and a staggering 20% were willing to negotiate terms before deciding either way!

Question nine: would you donate a kidney to me?

After mentioning beer, I might have had better luck with a less obviously alcohol damage prone organ, but with only two questions to go under the free account restrictions, I had to hit my respondents hard. We've all seen the scenario: If it was in your power to save someone (albeit someone off Twitter) with only serious but usually non-life threatening harm to yourself, would you do it?

Again, one person declined to answer all together, and 51.7% very reasonably turned me down flat. An amazing 48.3% of respondents either would or would consider donating a major organ! Humbled and astonished are the only words to describe how I was feeling by this point. In the UK, only 26% of the population are on the NHS Organ Donor Register, and have signed up to have their organs used to save a life after their death.

Question ten: In the event of a zombie apocalypse, would you throw yourself between me and the oncoming brain-ravenous hoard?

Given the total likelihood of this doing very little except stalling my inevitable demise, or at best, enabling me to reload my shotgun, I was expecting about no people to step forward for this one. However, my Twitter community is obviously far more heroic and selfless than the average street where people have to actually live next door to one another. Even given that a small percentage of the 11.1% who would cushion me from brain loss possibly have never seen a zombie movie, are feeling Moe Szyslak–depressed at the thought of getting the Mama Mia DVD for Christmas, or actually have a bit of a thing for zombies, this is a resounding victory for imaginary communities everywhere. Happy Christmas & a fantastic New Year to everyone over at Twitter who has made being online in 2008 such a pleasure, and to all good Social Network Service providers everywhere 🙂